This is one of my habits, membuat ramalan /target time on any events that I compete in. For this upcoming 27th Panaga Triathlon, I've set a target time for each swim, bike and run. My prediction is based on my fitness level, my time during training and past triathlon results of other people and me.

Luckily I wasn't disqualified because I was jumping, walking arah tempat tuhur and then baru swimming arah dalam. Then sampai at the other end, berehat.....heheheh membari malu. Tapi disebabkan semangat kuat, ku taruskan jua inda kira malu. I know that eventhough my swim is lousy, i will gain back the time that I wasted in Cycling and Running events. From last place in swimming (30th), I got 7th place in cycling and 6th in running. Overall ranking was 18th out of 30 participants and 10th out of 18 participants in the male category. My overall time was 1:00:15

I managed to improve my swimming time from 12mins 52 sec to 7mins 45 sec during the 26th panaga triathlon which was held on May 2007. My overall time was 51 mins 38 sec and was rank 5th out of 15. Mun ku ikut lagi this category, maybe ada peluang menang......tapiiii sampai bila kan stay arah category short distance ani. baik tah upgrade ke longer distance. 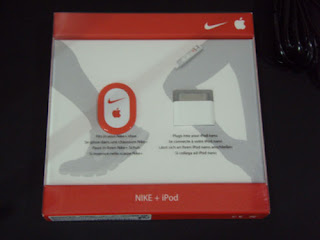 This is my Nike+ ipod Sport Kit. Masih dalam kotak. Still waiting for the right NIKE+ shoes because I just cannot simply buy NIKE+ shoes just because its brand new and fashionable. Kalau dulu dulu, boleh lah....asal baru and lawa, beli saja. Now, educated sudah sikit sikit pasal kaki and pronation. I now know that what is best for my running feet. I'm in the category of 'Flat Foot' which means I may have a tendency to overpronate. Those with 'flat foot' will notice their shoes tending to wear mostly on the inside of the forefoot area. So my shoes type is motion control shoes or stability shoes. Macam mana usulnya tu ??? usually, rubber foamnya tebal dibelakang, berat sedikit and keras.

Posted by anakpanyu at 9:33 PM