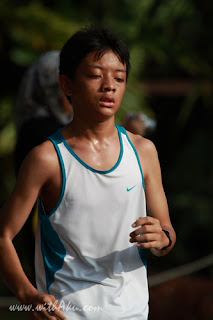 My nephew, Dayat was also there. I tried to find his parents pictures but tidak ada 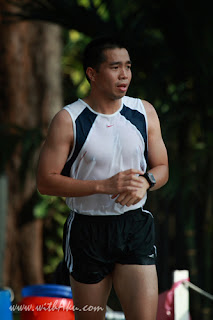 Rafidi - preparing for his B.Shahbandar Challenge. He is using Garmin Forerunner 305

Bukit Shahbandar Challenge falls on the same day as Singapore Marathon - 2nd December 2007 by which I'm supposed to take part in the full Marathon (42Km) but due to lack of training and budget constraints, I've to cancel it and luckily ada B.Shahbandar Challenge to replace it. To those Brunei runners and I'm pretty sure ramai yang ke Singapore this weekend, good luck and have fun. Aku yang sudah merasa ikut tahun lapas, siok hantap, kalah marathon di Brunei. You won't be running alone as there is so many runners, bukan lagi iibu (ribu), puluhan iibuu yang ikut.... compared to Brunei where the probability of you running alone or nda banyak orang during the competition is pretty high.

Posted by anakpanyu at 8:45 PM