Friday, Afternoon - WE had 2 bike accidents, 2 punctured tyres, 2 wounded knees, 1 damaged rear wheels & many more. More exclusive news after I upload the pictures. I'm still waiting for GD to email the pictures. It was taken using a camera phone waktu maghrib, so expect the quality to be poor. 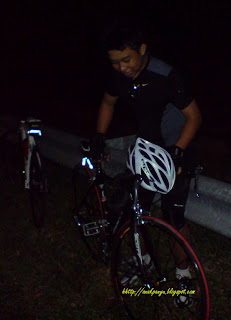 He wasn't riding that fast so no bruises, no deep wounds, just maybe bengkak bengkak arah kaki. He wasn't injured but the bike (the CR1 pro) suffered minor injury. The handlebar tapes suffered a minor cut. 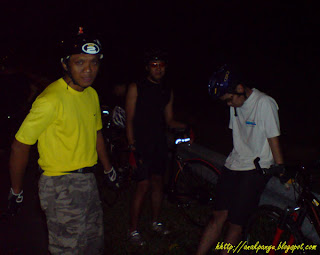 The second accidents occurred at the T-junction in front of the Ministry of Culture, Youth & Sport. Khiril was approaching the traffic light and I was behind him. The light was red, so we slowed down waiting for the light to change green. When the light change to green, he speed up a little but not fast enough because by the time he reached the traffic light, it suddenly turned yellow. He panicked and brake.

Di tekannya brek sebelah kiri (front brake) and causes the front tyre to lock out. You know what will happen when the front tyre stop moving all of a sudden. The bike will do a T-stop and the rider will be thrown to the front. That what has happened to Khiril.

Yang inda sioknya, I was riding behind him and when he falls down, I didn't have time to react. I hit his bike and fall down with my feet still clipped to the pedal. Aaarrrrgghhh....my CR1 pro. 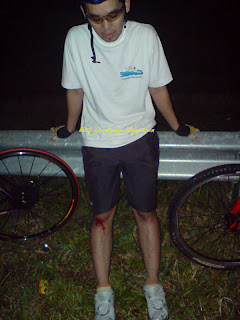 We weren't that badly injured. Just a minor cut and bruises to the knees. Luckily, Very lucky there wasn't a car behind me when the accident occurred, if not the driver won't have time to react and hit both of us especially me since I fall to the side of the road not to the curb.

After checking everything was OK, we continued the ride back to home. After 100m, I have to stop. Rupa rupanya tayar depan ku pancit. I guess due to the accident. We have four spares tubes but not one of us carry a bicycle pump. Atu baru ya KUFUR nikmat namanya.

Mau nda mau, my brother call his wife to pick us up. 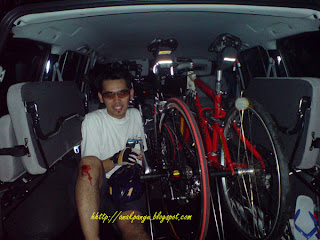 Mursyid (sitting in front), Khiril, my punctured CR1 bike and the mountain bike. The MTB rim was 'belingkuk' and cannot be ridden.

The four of us cycle back home. I was using Mursyid S30 bike. It was a very long uncomfortable ride. Bukannya apa ingau kan basikal ku.

We cancel our plan the ride on Sunday Morning. REST++

Posted by anakpanyu at 8:35 PM


If I could speak in any
language in heaven or
on earth but didn't love
others, I would only be
making meaningless noise
like a loud gong or a
clanging cymbal. If I
had the gift of prophecy,
and if I knew all the
mysteries of the future
and knew everything
about everything, but
didn't love others, what
good would I be? And
if I had the gift of faith
so that I could speak
to a mountain and make
it move, without love
I would be no good to
anybody. If I gave
everything I have to
the poor and even
sacrificed my body,
I could boast about it;
but if I didn't love others,
I would be of no value
whatsoever. Love is
patient and kind. Love
is not jealous or boastful
or proud or rude. Love
does not demand its
own way. Love is not
irritable, and it keeps
no record of when it
has been wronged.
It is never glad about
injustice but rejoices
whenever the truth
wins out. Love never
gives up, never loses
faith, is always hopeful,
and endures through
every circumstance.

May You Always
Experience This
Kind Of Love,
Dr. Howdy

P.S. Here's some blogs & videos
that I found of interest as
I negotiated my way through
cyberspace:


Tell me sometime what your
thoughts are about all this:O)