Road race on the 1st January 2008. But don't ask me where and how far. Nda ku tau. Atu saja yang ku tau. Tadi afternoon, I went to Triple Star and the form for the race was there. It was just a plain form with no introduction, due date, registration fees or what so ever. When I asked the staff overthere, diorang pun inda tau.....hmmmmmm. 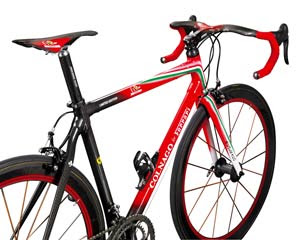 Colnago Ferrari 60th Anniversary Limited Edition.
Only 199 units were made.

Kalau 1st january, I won't be able to participate but if they postpone it to ....let say end of Jan, most probably I would participate. It would give me enough time to practice. With the rainy season going on now, I guess most of the cyclists would be having difficulty to practice. Ride on.....

Posted by anakpanyu at 6:44 PM