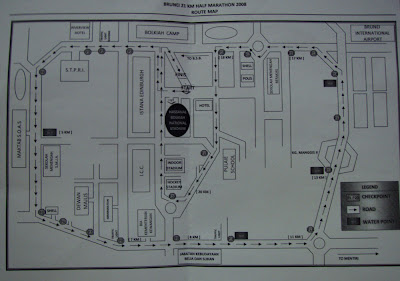 Above is the map for the 21Km run. It has a few long hills especially the Bukit Supa Save at Jalan Kebangsaan and Bukit MOF.

I guess most of you don't know that the top 4 Brunei male runners for these competition will be selected to represent SCB GROE 2008/2009 (Standard Chartered Bank Greatest Race on Earth) race on four different countries. Last year only around 25 runners showed up for the selection including me. I guess most probably it will be the same runners.

10th August - I still have time to practice. Hopefully I can improve my 21k time.
When is Brunei Triathlon? No announcement has been made. I hoped they do it in November or December.

last year was mainly for selection so that why not many runners signed up.