The Return of Lance Armstrong 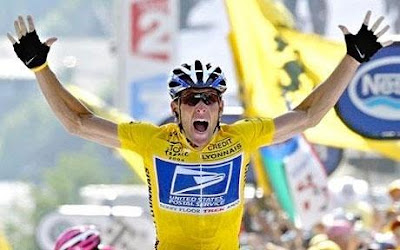 The 7th times winner of Tour de France has decided to return to professional cycling. More news from here

AUSTIN, Texas – September 9, 2008 – Today, Lance Armstrong, cancer survivor, founder and chairman of the Lance Armstrong Foundation (LAF) and cycling champion, released the following statement regarding his return to professional sports:
“I am happy to announce that after talking with my children, my family and my closest friends, I have decided to return to professional cycling in order to raise awareness of the global cancer burden. This year alone, nearly eight million people will die of cancer worldwide. Millions more will suffer in isolation, victims not only of the disease but of social stigma. After the passage of Proposition 15 in Texas, a $3 billion investment in the fight against cancer which is helping to make this disease part of the national dialogue in America, it’s now time to address cancer on a global level.”
Mr. Armstrong will discuss his cycling program and an international LIVESTRONG strategy on September 24th in New York City at the Clinton Global Initiative.
Live Strong Blog

Lance Armstrong fills the headlines in the Vuelta
Yesterday it was a rumour. Today it is a fully-fledged story. Lance Armstrong is occupying the headlines in this year’s Vuelta, which is taking a well-deserved break from hostilities in the form of various “easy” stages prior to tackling the key moments of this year’s race: two mountain finishes in Asturias. The 37-year old Armstrong has issued a statement in which he says: “I am happy to announce, following consultations with my children, my family and my closest friends, that I have decided to return to professional cycling in order to draw attention to the global fight against cancer”. The 7-times winner of the Tour de France has no team as of yet, although it rumoured that he will sign for Astana, where he would once again coincide with Johan ruyneel….and Alberto Contador.
Tour of Spain Website

The Leadville Trail 100 bike race was today, with Lance Armstrong and Dave Wiens running neck and neck almost the entire way through. Dave Wiens is a local who has won the race the last 7 times. We first caught them at mile 20ish blasting down the powerlines with Dave in 3rd and Lance in 4th right behind him. By mile 55 (guestimate), Dave and Lance were 5 minutes ahead of the next rider. We watched Lance inches behind Dave as they blasted down the hill and across the dam at 35 or 40 mph (yet another guestimate). Climbing the powerlines (ugh more powerlines) at mile 75 or 80, Dave was 2 inches behind Lance as they powered up the hill. They were neck and neck like this until somewhere before the finish Lance crashed and Dave went on to victory about 60 seconds ahead of Lance. Both Lance and Dave broke the previous Leadville 100 bike record of 6:58. It was pretty exciting stuff to watch.
100Mile Bike Trail Race on August 9th, 2008

In an online Vanity Fair article published yesterday, and a video released on his cancer organisation Livestrong's website, Lance Armstrong confirmed that he will, "one hundred per cent", ride the 2009 Tour de France - and do so to win.
If this was anyone else but Armstrong you wouldn't bet against such a ground-breaking decision ending in tears.
The seven-time Tour de France winner will be 37 years old by the time next year's race gets under way on the Formula One circuit in Monaco next July.
Only one rider over 34 in the race's history has ever won the Tour - 36-year-old Belgian Firmin Lambot in 1922 - but then again only one sportsman in history has ever recovered from near-terminal cancer to achieve what Armstrong achieved until his retirement at the top of his game in 2005.
Which is why many fear for the Texan's legacy. By leaving the sport at the height of his powers Armstrong maintained an unparalleled unbeaten run in the world's hardest sporting event. In doing so, he became a heroic figure for cancer sufferers worldwide - an icon bigger than the sport which made him.
But it is precisely for his athletic legacy that Lance seeks a return to the fold. His career was blighted by constant accusations of foulplay - despite the fact that he never returned a positive doping test in competitive racing.
With cycling having been reborn over the last few years as an event that won't tolerate the cheaters, the 2009 Tour will give Armstrong the ideal chance to prove his abilities to his detractors - and to the cynics in general.
It was left to Armstrong's lawyer to confirm the rumours of his friend and client's return. "We're not going to try to win second place," said Bill Stapleton. The 'we' shows just how delicate Armstrong's situation has become over the last decade.
Besides his on-going quest to improve cancer awareness, there are also sporting reasons that drive the ever-competitive Armstrong back into the peloton. The American has ridden in recent mountain bike and cyclocross events, while his sub-three-hour time in the last two New York marathons shows just how fit he still is.
Indeed, given the fact that since his departure the Tour has been won by both Oscar Pereiro and Carlos Sastre - two average riders despite all their qualities - evidence suggests that Armstrong would have already sewn up the eighth title he now so craves had he put his initial retirement plans on hold.
It will not be until Sept 24 at the Clinton Global Initiative in New York that Armstrong will disclose which team he will ride with in the coming season.
Rumours suggest he will team up with his good friend Johan Bruuyneel at the Luxembourg-based, Kazakh-funded Astana team. This makes sense: the two worked together on each of the previous seven wins, while the arrival at Astana of another former US Postal/Discovery team director, Dirk Demol, seems to confirm the inevitability of it all.
The official team line is dismissive of such a reunion, a press officer saying in no uncertain tones: "Armstrong is no part of our team. Team Astana has no plans with him."
But that may be because the prospect of Armstrong at Astana spells out a huge conundrum regarding the fate of the sport's new superstar, Alberto Contador.
It is hard to see the 2007 Tour winner play second fiddle to a rider more than 10 years his senior - especially given the fact he was denied the chance of defending his crown this year owing to Astana's exclusion from the race.
The 25-year-old Spaniard instead rode the Giro, winning the three-week race in Italy in May on a whim after less than a week's preparation. Contador is currently racing the Vuelta in Spain and is the favourite to triumph when the race concludes in Madrid on Sept 21.
If Contador adds the Vuelta to his rapidly expanding palmarès, he will become only the fifth rider in history to win all three major tours - and the first rider to do so in just 14 months.
In short, Contador makes Armstrong look like a comparative one-trick pony of a racer. Age may be on his side but if Contador was to think about his own professional cycling career surely he would be bent on bringing about his own Tour hegemony, rather than contributing to the extended longevity of another's?
There can be no denying that a team boasting Armstrong, Contador, the American Levi Leipheimer and Germany's Andreas Kloeden would be an explosion of riches that could hog the entire podium come next July in Paris.
But how Astana can convince a rider who has the potential to join the elusive five-Tour club himself to put his plans on ice for yet another year is anyone's guess.
The likelihood is that Contador will demand to be released from his contract, whereby wiping out Astana's leadership structure and forward planning in one-fell swoop. All in favour of following a path which quite probably only has the legs to last one year.
And yet for the good of the sport, Armstrong and Contador must be on different teams next year. If the American's comeback is to have any credibility it must be done in spite and not in collusion of his successor.
Such a battle of old against new would be the sporting highlight of 2009.
Telegraph.Co.UK

Posted by anakpanyu at 9:27 PM