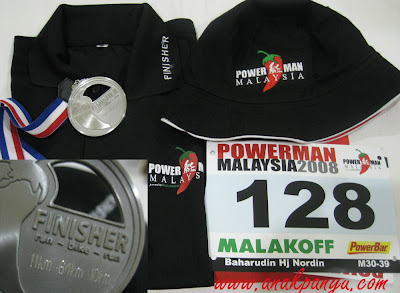 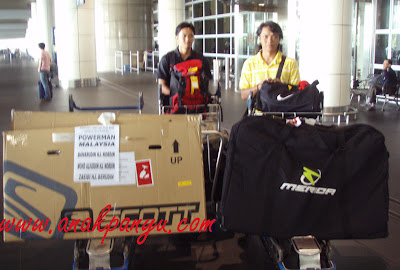 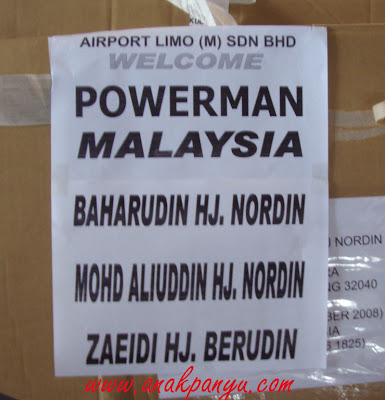 Arriving at the KLIA airport on Thursday, 6th November around 2pm. Our transportation was ready and greeted by the Powerman committee. It took more than 3 hours to reach to our Hotel at Sri Manjung, Lumut Perak. From KLIA, we asked the driver to take a detour to the bicycle shops in Petaling Jaya - BikePro and KSH. Luckily no additional charges for the detour. They charge us RM600 per trip (3 persons + 3 bicycles). Expensive!!! 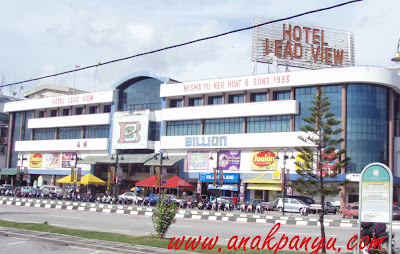 We arrived at our hotel around 7pm. According to the Concierge, we were the first hotel guests to arrive for the Powerman event. I guess we were to early. Other athlete especially the Elite have arrived since last week and they are staying at the resorts near Lumut.

We checked in our rooms - 2 connecting rooms. Unpacked our bicycles. Luckily my bicycle didn't have any problem but the other 2 bicycles have gearing /tuning problems - a minor problems which was solved.

The full panaromic view from the hotel room 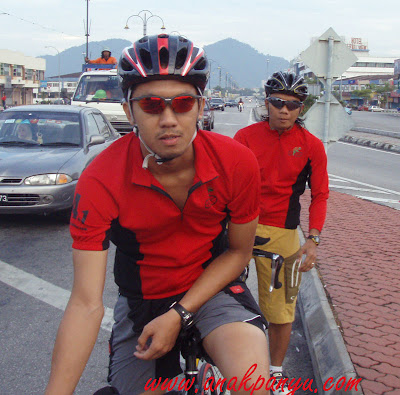 2nd day, Friday, 7th November 2008. Test ride the bicycles to check for problems and to locate the starting venue. We brought along our Team Anakpanyu Jerseys. We arrived at the mini stadium where the event will be held.


We were then approached by one of the local and asked us if we want a tour of the race route. He introduced us to the young local kids who was there training and asked them to show us the race route. According to them, they have been helping the overseas athlete for the past few days showing the race route. 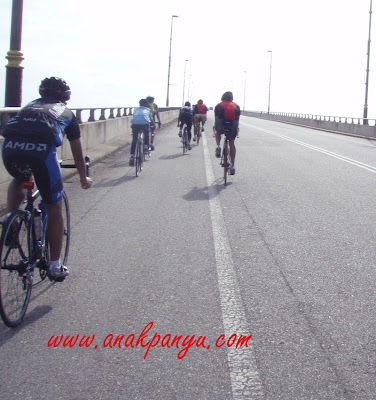 The race route for the run was totally flat - 5.5km x 2 loops. The bike route was 90% flat with 3 bridges to cross/climbed. The picture above is the highest bridge - almost the same bridge in Sg Teraban after the tol. We have to climb the bridge 4 times. Luckily, we trained for it - Bukit Mentiri. 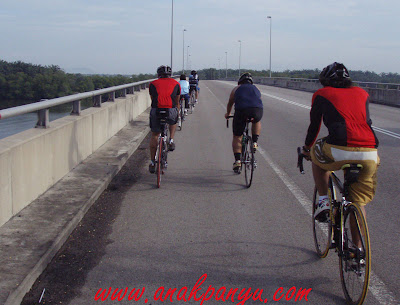 The top of the bridge before accelerating down. I managed to reach maximum speed 55km/hr. I guess some of the riders managed to get 60 to 70km/hr. 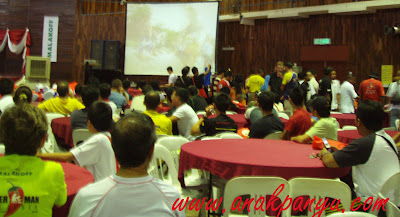 Saturday, 8th November - Briefing day and collection of goodie bag. The collection of goodie bag open from 12pm to 5:30pm and the briefing started afterwards. We came around 4pm, we collected our BIB numbers, timing chip with RM50 deposits, free t-shirts. There were a lot of sporting equipments being sold at a cheaper price. I've bought a lot of Powerbar products. If I have enought money, I would have bought another triathlon 2 piece suit. 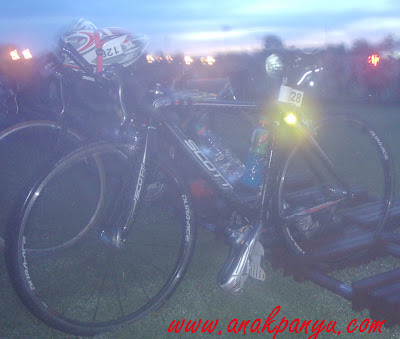 Sunday, 9th November - We arrived at the race venue around 6am. The race start at 7:30am. It is still early. I guess some of the athlete are still sleeping or on the way. I'm a bit nervous and with that come the urge to go to the toilet - as usual -

64km cycle - I have no problem with the cycling event as we have a lot of training for it compared to running. The first few kilometers I've managed to 'sayur' a lot of cyclists. I guess there were still in cruising mode or recovery ride after the run. As a results of that, I got a cramped on both of my legs. From past experience, you don't stop pedalling. Change your gear to easy - high cadence so that the muscles is relaxed. So my speed drop from 35 to 27. After a few minutes, I've recovered and once again aku potong a few cyclists. Some managed to 'sayur' me back. Drafting is illegal and if you get caught you'll be DQ (both the drafter & draftee) after the 3rd warning but I saw a lot of cyclists doing it. There are even a group of cyclists going from one end to the other end drafting. If they saw the marshals, they break up, then they re-group again. I guess they didn't attend the briefing or read the booklet instruction. This is what I called 'taipau' . tunjuk kuat arah non-drafting race. Show your leg power by doing 'one man gang' style.

The long steep bridge was not a problem to me. I 've managed to climb the bridge without changing to a smaller cranks and managed to sayur a few on the way up. I've managed to complete the cycling in 2:01:49 hours. Below the target of sub 2 hours.

The final leg- 10km run. This is the hardest part. I cannot go any faster than 6:50 mins per km. My mind want to run faster but my leg doesn't want. I did a few run-walk-run routine. One thing for sure, I'm determine to cross the finishing line in style and nobody is going to 'sayur' at the end of the line. 500m to the finishing line. I speed up eventhough it is still slow and managed to pass by a few runners. I even encourage one of the runner to go faster with me. He said' you go ahead lah', I guess energy habis lah. 200m to the finishing line, My thigh started to cramp, I slowed down and change the way I run so that the cramp will go away. I don't want to cross the finishing line dragging my legs. Before entering the red carpet, the runner that I encourage to run faster, pass me by - I guess he was reserving his energy for the final sprint. I saw the clock 4:09:45. I have 15 seconds to get sub 4:10, so I started sprinting and it is still slow and I managed to 'sayur' that other guy for the last time before crossing the finishing line exactly 4:10:00 and that guy just one second behind me. Woohooooooooooooooo 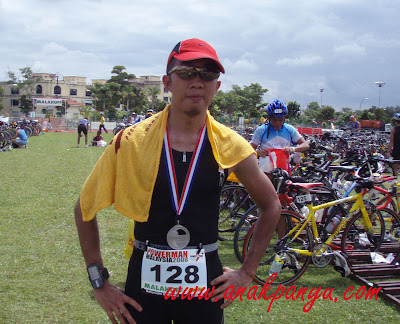 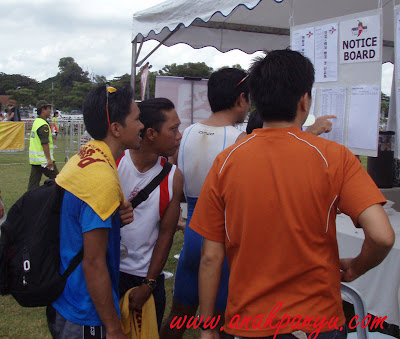 Checking out the results

It was a good results but I'm a bit dissapointed. I should have done better in my running. I guess that day was not a good day for my running. There was no power. Well, there will always be next year. We will come back again and hopefully one of us will break sub 4 hours. 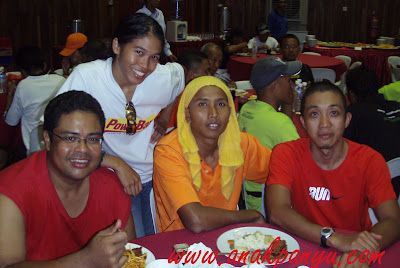 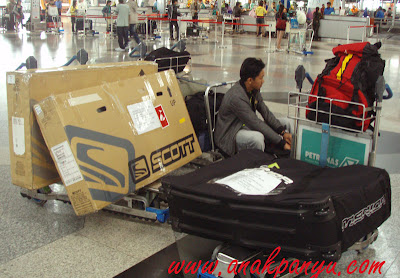 KLIA Airport waiting for the check-in counter to open 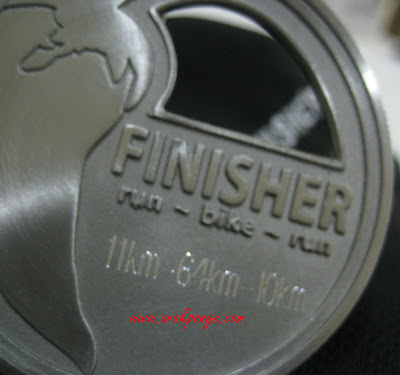 Next target is to conquer Ironman (at least Ironman 70.3), then it would be complete

Posted by anakpanyu at 8:25 PM