Stung by a bee

Yup, I’ve got stung by a bee while we were riding this morning. I got stung near the DST HQ at Tungku Link Highway. I was infront while Zaeidi and Ali was at the back and were travelling around 35k/h. Out of nowhere, a flying insect hit my sunglasses and without wasting time, crawl inside the sunglasses and decided to sting just below my right eye.

Emergency stop and luckily nobody hit me from behind. Zaeidi have to make an emergency detour to the grass. The ‘bee’ managed to fly away before I have to chance to catch it. Stupid bee – adakah patut, ia melanggar aku, ia yang marah, disengatnya aku. Patutnya aku yang MARAH!!!!!

So dalam rasa kesakitan, we decided to cut short our ride and went back home. That was a painful ride. 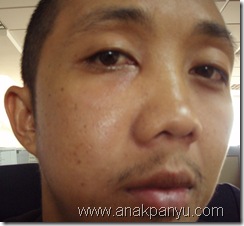 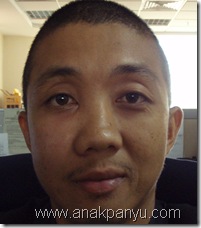 The picture was taken 3:54pm at the office after I went to the clinic. I applied the prescribed cream and bertambah bengkak tia pulang. I was also given an antibiotic

Posted by anakpanyu at 8:26 PM