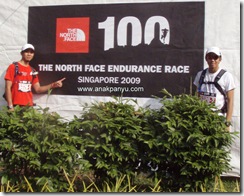 Short report: 1st Brunei Marathon 2005. Do you guys still remember? The road running along Muara-Tutong Highway and then the off-road running at Bukit Shahbandar 9 hills. Well, The North Face 100 Singapore is almost the same. I thought it is pure trail running but they added around 25 to 30% road running or in other words –asphalt ground whether on the road or inside the jungle. you decide……….. 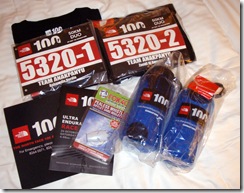 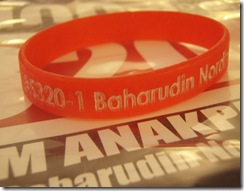 Race T-Shirt, BIB-Number with timing chip, Race Map, Booklet, FOX40 whistle, 1L bottle and a bracelet ID for each runner with your emergency contact number on the inside of the bracelet. Good quality race kit……………We picked up our race kit a The North Face shop at Suntec City. We are doing the 50km duo (25km for each runner). 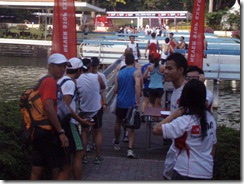 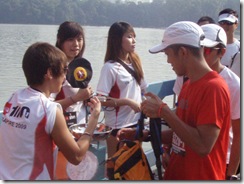 Checking the weight of the hydration bag whether you’re carrying enough fluid or not. For us it was more than the recommended 1L. We carried 1.5Lof water.

For the 50KM duo, it was recommended to carry 1L of fluid and for the 100km Solo/Duo, it was recommended to carry 1.5L. I saw a few runners are just using hydration belts and the weight I guess some of it is less than 1L. I was wondering how they can survive on so little fluid. Water checkpoint is very limited. Maybe they have tried the route and has experience on what and how much to carry. 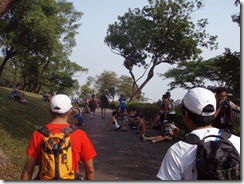 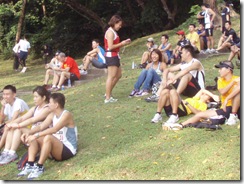 Once again, I saw quite a few runners wearing their road shoes. This is a trail running not a road running so why are they wearing road shoes. You don’t use your road bike on a MTB trail, so the same goes to shoes. So being a busy body, I asked a few runners about the trail/route and they said it is hard ground. So hard ground can be hard soil/earth, tarmac, asphalt or anything resembles the word HARD. Did we wear the wrong shoes??? time will tell…………. 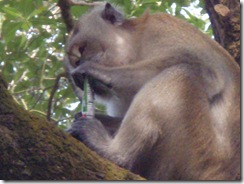 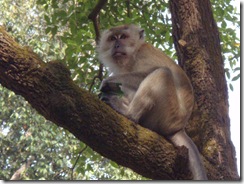 While waiting for the flag-off (30mins), some clever runners decided to give the monkey an energy bar. Hyper active monkey. 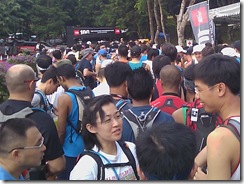 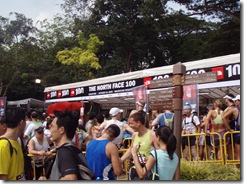 The race was supposed to be flag-off at 10am but delayed about 10mins due to some other events being carried out at the other side of the park. The 100km solo was flag-off at 4am and 7am for the 100km duo. 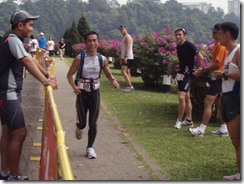 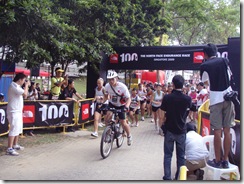 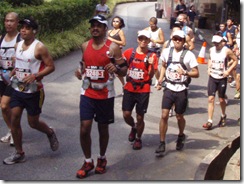 Finally the race started with ladies group in-front, then mix and guys. The track/trail at first was very crowded. Have to be able to do some close cutting at the edge of the trails. As time goes by, the runners are scattered around, so the narrow trail now become an open trails.

As first we have to do a lot of potong-memotong the other runners since we started  a bit far back of the group. Due to a lot of sudden movement, my energy drained out too fast. Zaeidi was already way infront of me and slowly he disappear among the runners. He was too fast for me or I was too slow for him. Either way, I have to upgrade my speed. I have the endurance but not the speed.

What frustrated me the most is running on the road. I was expecting pure trail running. Running using trail shoes on a road is pretty much felt very hard. Eventhough some of the track is off road but comparing to Tasek Lama/B.Helang/Markucing Trail, our trail is much worst/challenging. Even road shoes can be used on the this kind of trail (TNF). Only some part of the trail, it has medium size gravel/stones. Other areas, hard compact ground. Habis rosak tapak kasut Salomon ku di pakai arah jalan raya. Actually one of my friend already warned me not to wear trail shoes because most of the route is hard road. 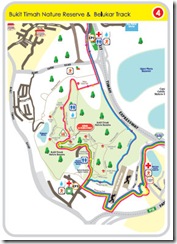 Climbing Bukit Timah, the halfway checkpoint. Singapore’s Bukit Timah is hard road all the way up just like at Tasek Lama when you climb up the road to the water dam. But this is way much higher and some part are steeper.

Most of the runners are either walking or slow/very slow jog to the top. So to compensate the time taken to climb, most runners including me and Zaeidi, we ran down the hill as fast as we can without injuring ourselves.

At the bottom of the hill is the water checkpoint and my 1.5L bag of water was almost empty. So I refill my bag with 100plus instead of water. I ate some bananas and cool down my head and body with cold water. 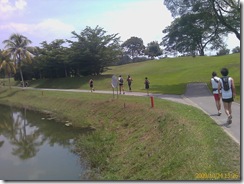 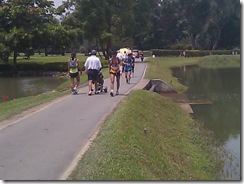 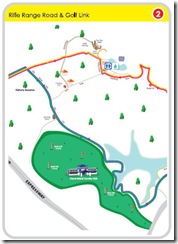 Its 1:30 in the afternoon. We are running, mostly walking-lah along the golf field. Its an open area and very hot. Not much trees around. I guess its 5 to 6km more to the finished line.

The green field is the Golf area and the blue line is the trail line back to the finishing area. 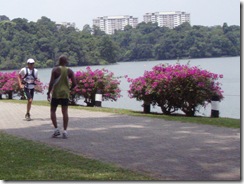 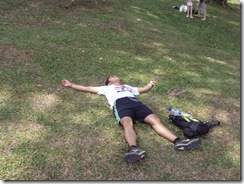 Zaeidi on his way finishing the 25km run. He said the last 5km was torturing. His fitness was up until 20km. He said, it was good that I didn’t agree to do 100km duo (50km each), if not it would definitely tortured us both. His training was mainly doing speed run and the distance he covered was mostly around 7 to 9km only. 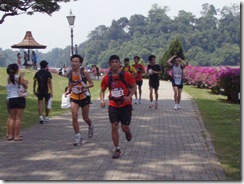 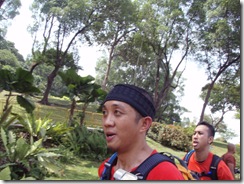 I’m on my way to the finishing line. I’ve decided to wear a headbuff and put my cap inside the bag. That was the hottest race I’ve ever participated.

The time taken by Zaeidi and me to complete the run. Zaeidi’s Garmin are much more accurate than mine because of better reception and technology.

The official time is 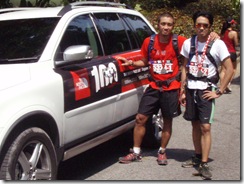 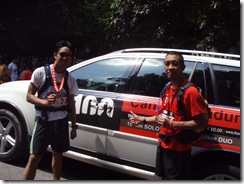 It was tough but a good race. They should have started way much earlier like 7am or 8am and furthermore we should not have walk too much the day before the race – less shopping, more rest. It makes your feet and leg tired.

Can we endure? Yes we did it.

Next year probably I’ll try it again either the 50km duo or the 100km duo. If 50km duo, I would just use a hydration belt instead of a hydration bag. Less weight and easy to carry. Less torture to the body.

For recovery period, my leg recovered way much quicker, maybe it was because I was used to running 20+++ km.Three years ago, it would take me around 4 to 5 days for the leg muscle soreness to recover and even walking after the race was difficult. Now, it is normal. I guess for Ahmad Fathi, he is so use to running 42km, that his recovery time is way much faster compared to few years ago. If you ask me to run 42km, I would be able to do it, but after that it will be a painful recovery of 5 to 8 days, not to mention walking like a penguin after that.

Things to prepare for next year:

4. more speed and endurance run training just to catch up with Zaeidi.

5. more importantly, do the shopping part after the race. rest can be done after coming back to Brunei.

If Brunei want to organize this kind of race, a few trail come into my mind:

Posted by anakpanyu at 1:34 PM