They arrived at Bangar, Temburong before 8am. The weather was still a bit moody and the road was still wet.

After 10km from Bangar, Sofian’s bicycle had a puncture and it took them 2 hours to fix. A piece of broken glass managed to cut a big hole in the tyre thus requiring them to change to spare tyre (luckily they brought 1 spare and it is a tubeless). 2 hours of mounting the tubeless to the rim and it broke their tyre opener also.

Crossing Terusan river after the Temburong border. It seems that they cut queue.

Hotels was fully booked at Beaufort due to some festivals being held, luckily they have friends at Membakut, so homestay at Membakut. 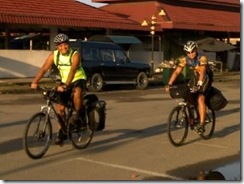 They reached Kota Kinabalu, Sabah very early around 10:30am. From Membakut to KK is around 80km 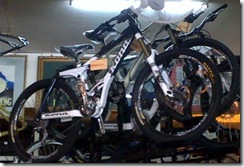 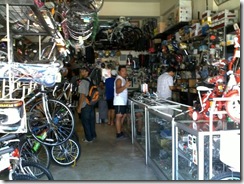 One of the bicycle shop in Kota Kinabalu, Sabah. 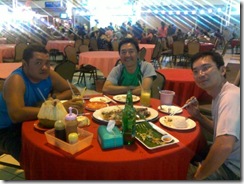 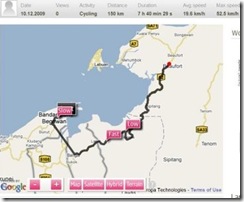 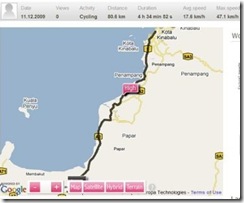 Continue journey to Kinabalu Park – Hill climb all the way. Only Sofian and Jaysen continued their journey while Mike decided to enjoy the day at Kota Kinabalu before heading back to Brunei via Labuan.

A total of 90km including 50km cycling up the National Park. 50km in 7 hours. 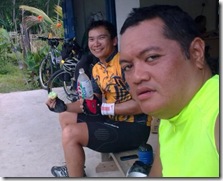 Reached Kinabalu Park around 4:15pm and they stayed overnight at one of the rest house in Kundasang. Its already late for them to go back to KK.

Due to exhaustion and not yet fully recovered, Sofian decided to go back to KK using public transport while Jaysen continued his journey back to KK cycling down the mountain to KK. Sofian arrived at the hotel around 11am while Jaysen reached the hotel at 1:30pm.

Sofian and Jaysen went back to Brunei via Labuan. They reached Serasa ferry terminal around afternoon.
Well done guys for the achievements and hopefully others will follows.