Saturday, 2nd January 2010 – I just had my 2nd bike ride at Labi and the first ride for 2010. This time we went all the way to the end of the road – Rumah Panjang Teraja – 53km from Sg Liang Recreational Park.

Around 20 plus plus cyclists showed up and mostly are from Brunei Muara. Thirteen cyclists (pictured above) and another 5 cyclists (not in the picture) reached the Teraja checkpoint and other cyclists only rode until the Labi shop checkpoint (35km mark) 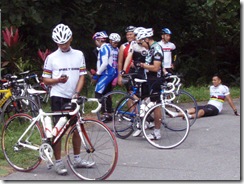 It took us almost 2 hours to reached Teraja longhouse and another 2 hours to get back to Sg Liang. If added the resting period, it would be around 4.5 hours. 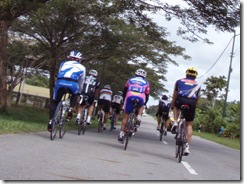 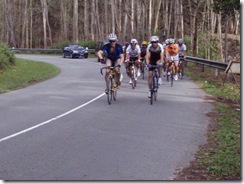 The weather was very good at first, not too sunny. But by the time we went back to Sg Liang i.e 11:30am, the sun decided to show itself and switch on the heater.

Since my capabilities is only limited to around 80km, so after reaching the maximum distance, I had cramped on both legs but I know from my own personal experience, it is not a good idea to stop, it is better to carry on. The trick is to switch to heavier cassette – put more effort or harder pedaling (someone taught me). Eventually it will disappear and for sure it will come again. I just carried own pedaling using slightly heavier cassette until I reached Sg Liang – flat land, downhill and uphill all using heavy casette.  NO PAIN NO GAIN. Ada rasa sakit, ku tekan lagi sampainya hilang. Some of you might not agree with me but it works for me. 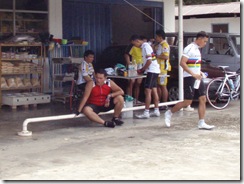 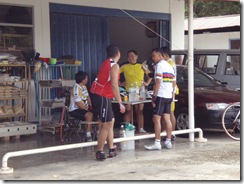 Until next time, we will be back to Labi for another challenge…………………

Note: Need to put more mileage on my cycling. More mileage to built up endurance and stamina.

Posted by anakpanyu at 9:37 PM