cabaran kuala belait – the story, the pictures and the result

The race was held in Kuala Belait district, 26th December 2010. The race was supposed to be swimming, cycling and running but if the sea condition on that day was not good, the swimming will be change to a run along the beach.

Race day, the weather was good, the condition was good, low tide is taking place and we were expecting for the swim to take place but instead it was a run to the sea until chest high and return back to the sea.

I guess they didn’t request for help from authorities of the seas such as Marine police, fire brigade, sports departments or who ever can provide assistant in the water. 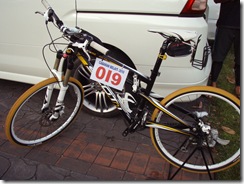 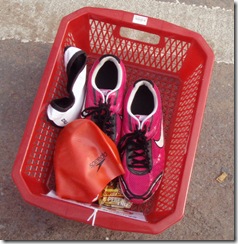 My mountain bike – tires converted to 1.5 touring tires and bottle cage at the back. My pink Nike shoes, swim cap and goggle. 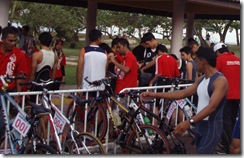 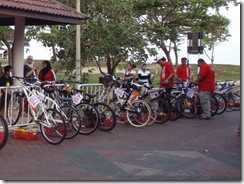 Body marking done around 7:00am and those white barriers were used as a parking for MTB. Luckily it was a mountain bike, if it was a road bike or triathlon bike, many would have complaint about the racking styles and wouldn’t used it. It would certainly damaged your carbon fork. 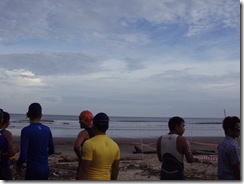 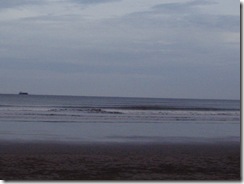 7:15am, checking out the seas, low tide is setting in. No floating buoy can be seen. Its going to be a long run to the ocean before we can really swim

The race was supposed to start at 7:30am but due to the late arrival of KB District Officer, the race was delayed to 8:00am 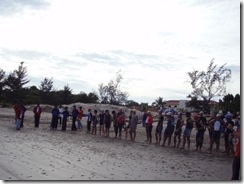 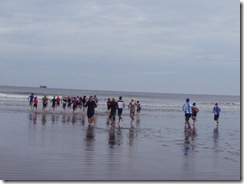 By 7:50am, we were ready at the starting line up and we were waiting for the KB District Officer but by 8:00 am, we were told to wait until 8:15am. Luckily the Sun was still hiding behind the cloud, so it was a bit ‘mendung’

It wasn’t a swim, it was a run to the sea chest high, U-turn at the pole and run back to the beach. It was a very fast run and completed within 2 minutes. 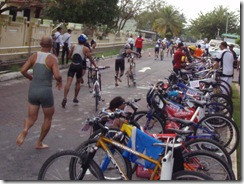 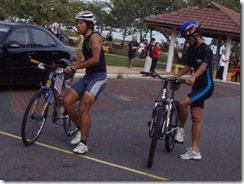 8:17am, I’m on my way to the 30km bike ride. Hj Tukuk have just arrived for his first transition. I was 11th out of the water and at the starting of the bike leg, if my calculation is correct, I’m 5th.

At around 10km mark, Hj Tukuk comes along and I managed to draft behind him. With that we managed to overtake another 3 more cyclists and they also draft behind us and stayed together as long as everyone can hold. Hj Tukuk managed to break away from us and 1 cyclist followed him. The 3 of us just let him go, I, myself don’t want to chase him. It was a good attack from him. He stayed drafting way at the back, recovering and at the right moment when some of us are already tired, launched the attack. 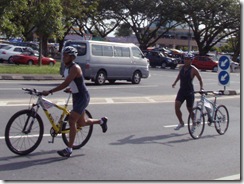 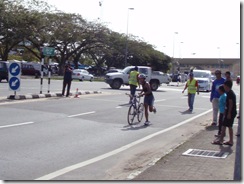 9:07am, Zulkifle Liman and Faizal arriving at T2 and Shazwi arriving 9:11am in 4th place 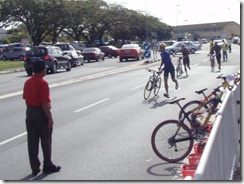 The three of us arrived almost the same time around 9:16am. 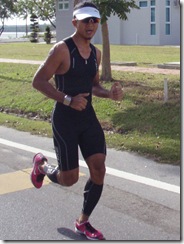 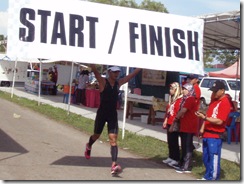 The 3km run was a very fast run. At the start of the run, I was 9th and tried very hard to catch the person in front of me which was Hj Tukuk. Around 1km to the finish line, I got a cramped around my thigh, but I just keep on going but carefully not to make the cramped worsen which would force me to slow down or walk.

With this, I have no chance in overtaking Hj Tukuk but eventually I managed to overtake him 200m to finishing line. Either I’m getting faster or he’s just too tired and slowed down. I crossed the finished line in 8th out of 30 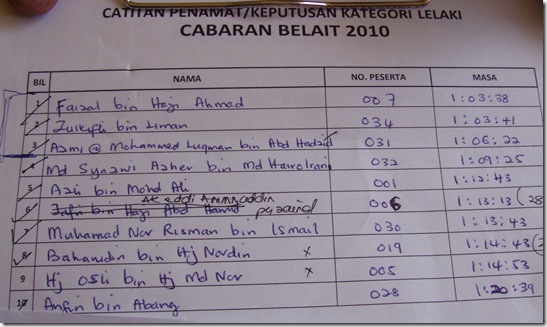 The full results. My unofficial timing are as follows;

All of us, the top 10 winners got our prizes. Actually only the first 3 were awarded the prizes but somehow on that day, they increase the number of prize winners.

Congratulation to all, it was a good event…………..

Posted by anakpanyu at 6:56 AM