The event was held last Sunday, 1st May 2011. This is my 2nd time ikut Borneo Marathon. Last year I did the 42km and this year I’ve decided to do 21km. I have exactly 2 weeks to prepare for the race after the Telbru Team Time Trial. Actually I’m not that worried because I still have my endurance and fitness and believe that I can finish below 2 hours. The problem is whether I have the speed to beat my previous time of 1:56 hours. 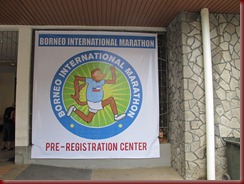 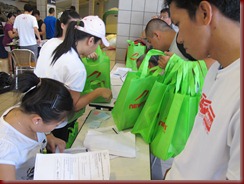 We went to KK by car on Saturday morning 8:30am and arrived around 3:40pm and went straight to the registration center to pick up our numbers and goodie bag. 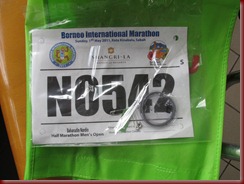 My number and my timing chip (the circular ring) – old model unreliable.

We checked in to our hotel and then went out for our late lunch at KFC which was around 5:30pm. After that we went checking the route from our hotel – Dynasty Hotel to the Likas Stadium so that tomorrow morning it will be easy for us to find the stadium.

7:30pm, I’ve decided to have my dinner at Secret Recipe and most of the guys are still full, so they just have their drinks. I want to eat and sleep early. Nutrition and rest are important – so remember that. 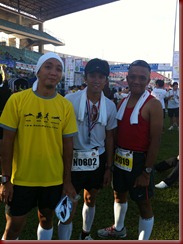 Race day – Reached Stadium Likas around 5am and still have time before the race start at 5:30am. As usual, a must visit to the toilet – unloading some unnecessary load.

10 minutes before the race, I did a warm up around the track. Then did a little stretched here and there. Switched on my Garmin Forerunner – it didn’t turn on. I keep on pushing the button but nothing happen. Yesterday it was fine and last night I recharged it. Now my mental is ‘unstable’ or ‘kacau’. So now I have to wear this dead watch and won’t be able to keep track my pace and achieve my target time of 1:55. Another problem, I remember I brought 2 powerbar gel and attached it to my race belt and when I checked it, it was only ONE. aaarrgghhhhhhhhh……………

So I tried to re-focus on my strategy. Maybe I can still achieve my target time. I’ve decided to run by monitoring my heart rate – breathing. Try to run below the threshold level where my breathing is not kucar kacir.

The race start at 5:30am and I staredt around middle of the pack and slowly cutting to the pack. I’m not sure where is Zaeidi and my brother Hj Abidin but they must be somewhere near.

At around 4km mark, Zaeidi overtook me and this is usually the usual scenario. He always overtook me the first few kilometers and sometimes I managed to overtook him again and sometime no. I just maintained my ‘unknown’ pace and slowly Zaeidi disappeared in the sea of runners.

Since the route is a loop where after the half-way point, the run to the finish line will be the same route as the first 11km so we can see the leading runners. A few hundred meters before reaching the half-way point, I saw my brother Hj Abidin is already at the other side and a few meters behind was Zaeidi. So both of them are not that far away from me – less than 1km. So for sure-lah with confidence I can catch them. Refill my energy using my one and only Powerbar Gel – Chocolate single caffeine at the half-way point, drink some water and increase my speed.

I know I can catch them because I have the endurance, speed and experience. For both of them, they already used up their speed and sooner or later they have to slow down. Endurance they have but experience, I have the advantage.

8km-to-go checkpoint, I overtook Hj Abidin and never looked back because he won’t be able to follow me, so nothing to be worried. I saw Zaeidi around 400 meters infront, so I’ve decided to control my pace, not to fast not to slow. Give him time and from the way he is running, he is suffering. Nearing the 2km-to-go checkpoint, I overtook him and increase my pace just in case he decided to catch me. I keep on looking back but he was nowhere behind me. Either he slowed down or stop. Yeaaaa…..victory is all mind.

I crossed the finishing line and I’m confident that I’ve managed to finish under 2 hours but not so sure whether I managed to beat my time of 1:56. A few days later, the official result was published and I’ve only managed to run in 1:57:14 – Gun Time. If it is chip time most probably my time would be around 1:56:XX. Better luck next time.

Next target is to beat my time for 5km or 10km – SCB Charity Run but that would be difficult because of the MOF Hill. And if I decided to do 10km, I’ll try to outrun some ONE – let see if I can catch him because his pace (faster than me) is not that far from mine.

Posted by anakpanyu at 2:22 PM