Pictures were taken from ainee hayat and Wani Ham

The 1st Tasek Climbathon which was held in 2008 (My report), I did not join and luckily I didn’t.

The race was schedule to start at 7:00am and since the venue is just 8km from my home, so I decided to run from my home at 5:30am to the race venue. A warm up run. I reached there around 6:20am and went straight to the starting/registration area. My brother is waiting for me over there with my bag. There were a lot of people and I can see that there were still many runners trying to get their bib numbers. The organizer have run out of bib numbers 2 days before the event and to those who have registered late, have just to settle for hand written numbers on a piece of paper.

We deposited our bag at the deposit bag counter near the finishing line. They took note of our bib number and write it on a bag tag which was tied to the bag. A very good work.

The warm up aerobics was held somewhere at the finishing line ( The finishing and starting line are at two different locations) and most runners are not bothered with it. They just stayed at the starting line doing their own warm up.

The race started 11 minutes LATE. This was maybe due to transition from aerobic to the starting line took a long time. The race started very fast with the elite trying to get in front so that when the route entering the single track section, it will be very difficult to overtake. I was somewhere mid-front pack. Traffic jam occurs on the first hill. I guess some of the runners are 2WD not 4WD off road hill climbers, so many get stuck here. 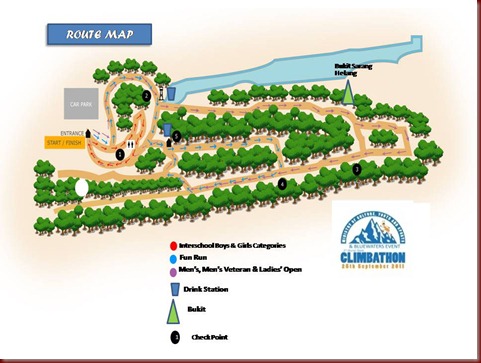 If according to the race map, there should be 2 water checkpoint and the route after Bukit Sarang Helang, should be using the new route (to the left), not using the old route(to the right).

There was NO water checkpoint along the race route !!!!!! So I felt sorry for the runners who did not carry/bring water. The only water given was at the registration counter. I think the organizer did not have the manpower to carry the water to the top of the hills. I did carry my own water since I don’t fully believe they can deliver it.

I finished the race in 51.10 minutes and the recorded distance on my Garmin GPS was 5.10km. Zaeidi did a faster time of 44 minutes.

The waiting around was a bit longer. The prize presentation was supposed to start at 9:00am but it got a bit delayed maybe because of other runners still in the jungle or waiting for the VIP to come or the results are not ready yet.

Most runners were hoping to get their certificates that day but were told, it was not ready yet. They could have prepared it early for those who have registered early. Take for example SCB and BIBD charity event. Certificates are ready to be collected once the participants finishes the race/event. 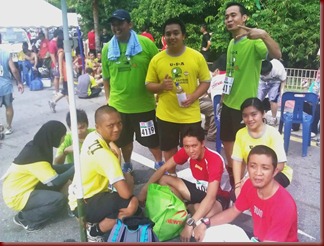 The event management are improving compared to their 1st Brunei Tasek Climbathon but for me they are not going to get 5 STARs. They could have done it better from their previous mistakes. The dark cloud of ‘Brunei Marathon JINX’ is slowly sticking to them. Hopefully next year or whatever year, a more better improved event.

Personally, I did have fun and had a good run and definitely I will participate again because I love to RUN.

Congratulation to the organizer for holding such a wonderful event.Keep up the good work. participants are amazing compare to the 1st event, unfortunately the Top male and female runners of Brunei went to the Tutong event. Hopefully, next time the Brunei top male runner is here to complete with the Kenyans, to inspire the local runners.
looking forward for the 3rd event soon...