Published on The Brunei Times (http://www.bt.com.bn) 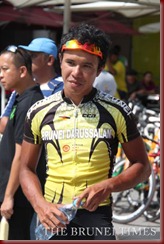 Brunei Cyclist Shows
THEY say football pretty much gets everything in Brunei. No other sport receives much recognition and total support such as football, and this is understandable due to the country's historic roots with the world's most popular game.

But clearly not all the best, brightest and most determined athletes play football. Similar to how a manager analyses and deploys team members according to their strengths as well as allocating roles and responsibilities accordingly, any ambitious country in the region should treat its rising athletes accordingly regardless of the sport.

Case in point: national cyclist Muhammad Raihaan Abd Aziz, whose overall time of 15:15:12 during Tour de Brunei 2011 was the best recorded by any Bruneian, finishing 22nd in a field of 64 (Shinichi Fukushima of Terengganu Pro-Asia Cycling, the winner, finished in 15:07:25).

The Tutong native who along with the rest of his peers in the national team is having the time of his life training under coach Yafiz Jamaludin. He learned the fundamentals and technical aspects of competitive cycling for the first time since the Malaysian national was brought in almost two years ago. But now he is facing an uncertain future in his career as a professional cyclist.

"Before this we weren't receiving the kind of guidance that we're getting now," says Muhammad Raihaan, who didn't hesitate to name Yafiz, besides his parents, as the biggest factor in getting him to where he is today.

"He's not selfish when it comes to sharing knowledge. He's good at man-to-man management and I think that's really important. And he really opens the doors to anyone who wants to join, as long as they are serious about it."

"Pretty much he unlocked and tapped my potentials. Now I've built my confidence and self-esteem, thanks to him. I used to find it hard to sleep at night before big races, now I think I can sleep a little better," he says chuckling.

And he still has plenty of years to go before having to call it quits Cadel Evans was 34 when he became the first Australian to win this year's Tour de France, and closer to local shores, Shinichi Fukushima proved age is just a number when he won the Tour de Brunei on the eve of his 40th birthday.

At 23, Muhammad Raihaan caught the eye of more experienced and accomplished riders who raced against him during Tour de Brunei some of whom, according to Yafiz, said it would be a "pity" if Brunei does not send a cycling team to compete in the upcoming Southeast Asian (SEA) games in Palembang and Jakarta this November.

The coach had almost completely lost hope on getting a Bruneian team to Indonesia, but in light of the recent performances of the national cyclists during Brunei's biggest cycling event, his fingers are crossed.

A willingness to dislodge the title of being the best Bruneian cyclist at the moment was illustrated when he asked the reporter if his teammates could join in on the interview, saying, "they're all good cyclists".

Muhd Raihaan let slip a tinge of disappointment in the tone of his voice when asked how he felt about his accomplishments during Tour de Brunei, saying "I was happy, but I wasn't so happy because at the time we were training during Puasa, which wasn't really much training, so I really think we could have done better."

"Because our training was insufficient ... and we were kind of being sidelined for some reason... all the training was done by the coach. For example the Youth and Sports Department didn't provide us with any food we did everything ourselves, getting the food, everything.

"We had a last-minute meeting a few days prior to the race because we were refusing to take part. We didn't have the necessary dietary supplements ... they didn't provide us with anything we were given bicycles to begin with, but what we used for training was what we used during the race itself.

"Even then we had to maintain and repair the bikes ourselves and the spare parts are not cheap. Only after that (the meeting) did they provide us with the necessary supplies," says Muhd Raihaan, acknowledging the need for a cycling team to have its own mechanic, which Brunei doesn't have at the moment.

"Good thing the bicycles were relatively new, otherwise we would've been in a lot of trouble. An old bike would've broken down in no time."

On the bright side, Muhd Raihaan nevertheless was happy with his results, saying there are always lessons to be learnt. "In any race its important to always be in the front, with the leading pack, and not at the back. If you're at the back there's some danger to it, if there's an accident at the front the ones at the back will pay."

No self-respecting man would readily admit that he is self-made, and Muhd Raihaan certainly gives the impression that he isn't. "I work as a clerk at the Department of Mosque Affairs. Without my boss's understanding and support, I wouldn't be here where I am today. He allowed me to pursue my sports passion.

"My dad was an influential figure as well. He bought me my first bicycle. I remember when living in our old flat in Tutong, I was then five, and he took off the supporting wheels. That was the first time I rode a bike properly."

Posted by anakpanyu at 1:55 PM