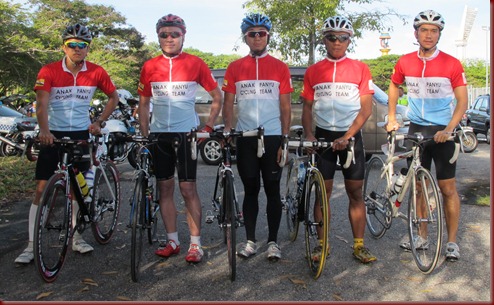 The race was held Sunday, 25th November 2012 around 8:30am. 97km including 10km rolling start. A road race without the elite – National and Continental Riders. A race for the weekend warriors. 21 teams, 105 cyclists signed up for the challenge.

Team Anakpanyu, our first race this year. New member have been added – Ahmad Fathi Junaidi, a well known runner and ironman and this will be his first road race.

The race was pretty much a fast pace. After the 10km rolling start, a few tried to breakaway but sucked back to the peloton. The first successful attempt was at Bengkurong Masin Road, when none other Zaeidi and Ahmad Fathi from the front, breakaway easily without no one try to follow them. After a few minutes a few cyclists breakaway again and chased the 2 riders and managed to catch them. The breakaway group / the leaders grew from 2 to around 15 riders.

Those who stayed in the main peloton either don’t want to chase the leaders because their team mates are in that group or some did try to catch the leaders but failed because not much support from other riders in the peloton.

Bukit Mentiri – 1 km uphill and afterwards a few other hills before reaching the finish line. These is when the peloton break up into smaller groups or individuals. The break away group were also split up. Some of them were also caught up by the peloton on top of Bukit Mentiri.

I was the last to arrived in the team. 3 minutes after the 1st rider. It was a very good race. I was only disappointed with my finishing. No more power for a sprint finish.

In conclusion, the race was very well received and these were the biggest participation of cyclists – 105 racer. Usually to get 50 cyclists to participate in the race would be a miracle. I guess the reason was because:

1. National and Elite riders was not allowed to participate (no pressure),

2. Distance was less than 100km (good for weekend warrior),

3. The race was announced 2 months in advance, so cyclists have time to train,

4. The 2nd road race for this year 2012. The first race was in July – Pehin Yahya Road Race which was open to all and distance was more than 120km.

2013, I heard it will be an exciting year where races will be plan out for the whole year – 10 to 15 races. Hopefully, it will become a reality not just on a calendar planner. Sometimes, it is better to plan 3 to 4 races a year and managed to organize it rather than planned 10 to 15 races and only managed to do 3 to 4 races only.

Posted by anakpanyu at 9:46 PM